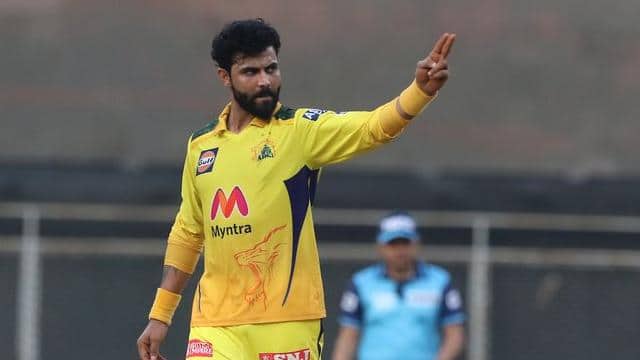 The 19th match of the Indian Premier League (IPL) 2021 between Royal Challengers Bangalore (RCB) and Chennai Super Kings (CSK) was played at Mumbai’s Wankhede Stadium on Sunday. Chennai won the match by defeating Bangalore by 69 runs. Chasing a target of 192 runs, RCB managed to score 122 runs for nine wickets in 20 overs. Ravindra Jadeja performed all-round on behalf of Chennai. He took three wickets of Bangalore after scoring a not-out 62 off the first bat. Earlier, Chennai batted first and scored 191 runs, losing four wickets in 20 overs. Harshal Patel took 3 wickets for RCB. With this, the CSK point has reached the top of the table. RCB has reached number two with their first defeat this season.

Jadeja Scattered The Hope Of RCB

For RCB, the opening pair of Virat Kohli and Devdutt Padikkal came out to chase the target of 192 runs. But both of them returned to the pavilion in the powerplay. Devdutt Padikkal scored 34 runs off 15 balls with the help of four fours and two sixes but Kohli did not appear in the form. He was caught by Mahendra Singh Dhoni on the slow ball of Sam Curren. Kohli scored just 8 runs. After this, Padikkal lost his wicket in an attempt to play Shardul Thakur’s ball.

Despite this, RCB managed to score 65 for two in Powerplay but Ravindra Jadeja then held the bowling responsibility and sent the pavilions to Washington Sundar (seven from 11 balls) and Glenn Maxwell (22 from 15 balls) in successive balls, make RCB’s position fragile. Maxwell was bowled in an attempt to play the long shot.

Jadeja then dismissed Dan Christian (1) and AB de Villiers, ensuring CSK’s win. Yuzvendra Chahal (8 not out from 21 balls) and Mohammad Siraj (12 not out from 14 balls) managed to play the entire 20 overs.

Earlier, after Dhoni’s decision to bat first after winning the toss, Faf du Plessis sampled his imposing drive while Gaekwad supported him. Chahal broke the partnership by having Gaikwad caught by Kyle Jamieson. Suresh Raina (24 off 18 balls) hit Chahal for a spectacular six in the long on field and then showed his skills to play long shots to Washington Sundar and Navdeep Saini as well.

CSK scored 191 for four with a 74-run partnership for the first wicket between Faf du Plessis (50 off 41 balls, five fours, one six) and Ruturaj Gaikwad (33 off 25 balls). Kohli made frequent changes to the bowling, and Patel dismissed Raina and Faf du Plessis to send CSK to the backfoot.

Raina attempted a long shot at midwicket while Faf du Plessis caught on the boundary off the next ball. His hit was beautifully caught by Dan Christian but he gave life to Jadeja which proved to be costly. Patel took his third wicket in the form of Ambati Rayudu (14 from seven balls).

Last Over Of First Inning

Jadeja scored an unbeaten 62 off 28 balls with the help of four fours and five sixes, his highest score in T20. Jadeja hit five fours and a four in Harshal Patel’s over in the 20th over. There was also a no-ball in it. A total of 37 runs were scored in this over and it became the most expensive over in IPL history. Patel had conceded only 14 runs in the first three overs, but in the end, his bowling analysis was three wickets for 51 runs. Dhoni remained unbeaten after scoring two runs.