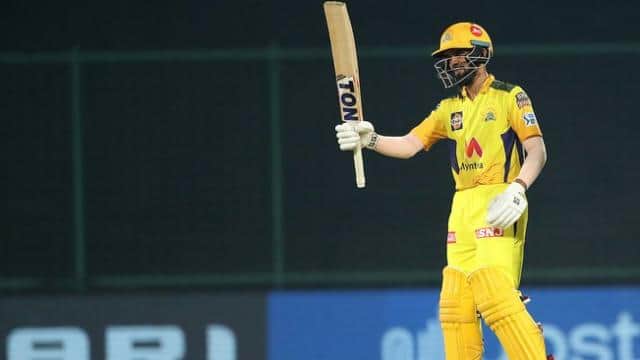 A half-century from openers Rituraj Gaikwad and Faf du Plessis, and a century partnership between the two helped Chennai Super Kings to top the points table in the Indian Premier League with a fifth successive win over Sunrisers Hyderabad by seven wickets on Wednesday. This is the fifth win by the Superkings in six matches and the team is on top with 10 points. Royal Challengers Bangalore have the same number of points but Chennai team is on top due to better net run rate. The Sunrisers are on the final spot with two points after their fifth defeat in six matches.

For Sunrisers, Manish Pandey scored 61 runs in 46 balls with five fours and a six, besides sharing a 106-run partnership with David Warner (57 off 55 balls, three fours, two sixes) for the second wicket. She managed to score 171 runs for three wickets. Kane Williamson (26 not out from 10 balls) and Kedar Jadhav (12 not out from four balls) batted in the final over, adding 89 runs in the final eight overs.

During this innings, Warner became only the fourth batsman to complete 10,000 runs in T20 cricket. Chris Gayle, Kieron Pollard and Shoaib Malik have achieved this feat before them.

The Superkings, who came out to chase the target, got a stormy start by the duo of Du Plessis and Gaikwad. The Superkings team managed to score 50 runs without losing wickets in the power play.

Du Plessis completed a 32-ball half-century with two runs off Kaul’s ball and took the team’s score to 100 runs in the 11th over. Gaikwad hit three consecutive fours in Suchit’s over and during this period he completed a half-century in 36 balls. Gaikwad also hit three fours in Rashid Khan’s over but was bowled on the final ball. Moeen Ali (15) opened the account with four on Khalil and then hit two fours on Rashid, but hit the same leg-spinner’s ball in the air and caught Jadhav. Rashid also bowled Du Plessis on the next ball.

Chennai Super Kings needed 24 runs to win in the final five overs and Suresh Raina (17 not out) and Ravindra Jadeja (07 not out) gave the team an easy lead.

Earlier, Warner decided to bat first after winning the toss but Bairstow became the first victim of Sam Curran, scoring seven runs. Pandey opened the account with a four on Chahar and then saw the ball of Curran to the boundary. Sunrisers scored 39 runs for one wicket in the power play.

Pandey and Warner failed to add to the run pace. Pandey hit the first six of the innings on Moeen Ali in the 10th over. Pandey completed his half-century in 35 balls. The century of the Sunrisers’ runs was completed in the 14th over. Warner completed his 50th IPL half-century in 50 balls. Warner, however, caught Jadeja in an attempt to play a big shot off Lungi Ngidi’s ball. Pandey also tried to play a big shot on the ball of Ngidi and his brilliant catch was caught by Du Plessis at the boundary. Williamson hit three fours and six off Thakur’s successive balls to take the team’s score to 150 runs in the 19th over. Jadhav hit four and a six off the final two balls of the innings.