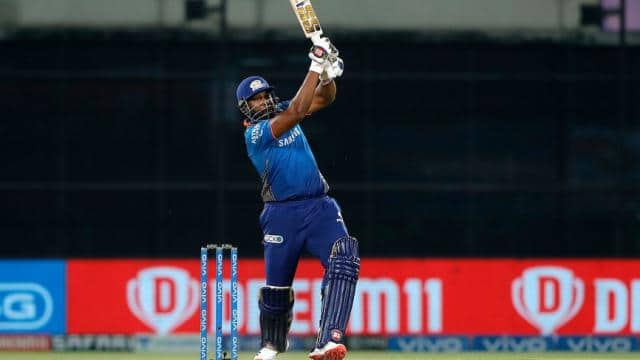 The 27th match of IPL 2021 was played between Chennai Super Kings and Mumbai Indians on Saturday at Arun Jaitley Stadium in Delhi. Mumbai achieved the mammoth target of 219 runs by losing 6 wickets. Kieron Pollard scored the most unbeaten 87 runs from 34 balls for Mumbai. He completed his fifty in 17 balls. Pollard hit 8 sixes and 6 fours during a stormy knock of 87 off 34 balls. He changed the match on the basis of this inning. Apart from Pollard, Quinton de Kock scored 38 and Rohit Sharma scored 35 runs. Sam Curran took the most three wickets for Chennai.

Earlier, after the century partnership of Faf du Plessis (50) and Moeen Ali (58), on the back of Ambati Rayudu’s unbeaten 72, Chennai Super Kings scored 218 for four, batting first against Mumbai Indians. Rayudu, after completing his 20th half-century in just 20 balls, hit four fours and seven sixes in a 27-ball unbeaten inning. He shared a 102-run unbroken partnership with Jadeja for the fifth wicket with Jadeja contributing just 22 runs off 22 balls. Chennai team managed to score more than 200 against Mumbai for the first time since 2008.

Pollard also did wonders in bowling

Kieron Pollard was the most successful bowler for Mumbai, taking two wickets for just 12 runs in two overs. Mumbai’s main bowler Jasprit Bumrah gave 56 runs with one wicket in four overs, which was his most expensive spell. Trent Boult took one wicket for 42 runs in four overs. Earlier, after losing the toss, Ruturaj Gaikwad hit for the second ball of the inning for Chennai, but Bolt showed him the path of the pavilion after two balls. Hardik took a catch and finished his innings of four from four balls. Bumrah made a comeback to end Moeen Ali’s innings by getting caught by wicketkeeper Quinton de Kock.