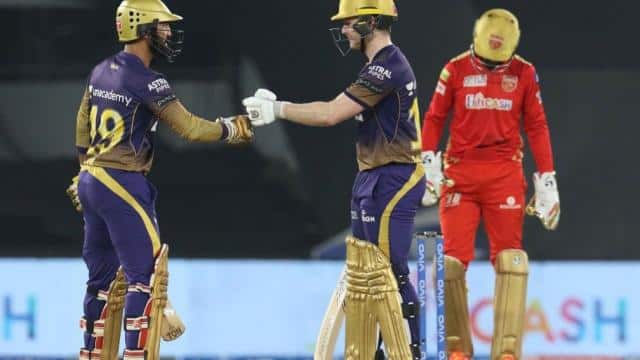 After a stunning performance by the two-time champions Kolkata Knight Riders’ bowlers, defeated Punjab Kings comfortable in the first match of the IPL at the Narendra Modi Stadium with the finest innings of Rahul Tripathi (41) and captain Eoin Morgan (47 not out) defeated. Kolkata held Punjab to an average score of 123 for nine and then made it easy to win by scoring 126 runs for five wickets in 16.4 overs. This is Kolkata’s second win in six matches while Punjab’s fourth defeat in six matches.

After Losing Three Wickets, Kolkata Changed The Scenario Of The Game.

Kolkata lost three wickets in the first three overs chasing the target. Moises Henriques got caught by Shah Rukh Khan in the first over, without opening the account to Nitish Rana. In the next over, Mohammed Shami lbw Shubman Gill. Gill scored nine runs off eight balls with two fours. Arshdeep Singh caught Sunil Narine at the hands of Ravi Bishnoi on the last ball of the third over of the innings. Kolkata’s three wickets fell for just 17 runs but Rahul Tripathi and Morgan shared a crucial 66-run partnership for the fourth wicket. 83 runs of the innings were scored when Deepak Hooda caught Rahul Tripathi off Shahrukh Khan near the boundary. Rahul hit seven fours in 41 runs off 32 balls.

After that, Andre Russell, who landed on the field, proceeded to the innings with Morgan but Russell was run out on the direct throw of Arshdeep Singh on the team’s score of 98. Russell scored 10 runs off nine balls with the help of two fours. Dinesh Karthik, who landed on the ground, then scored 12 runs off six balls with the help of two fours. Karthik hit the winning four for the team. Captain Morgan hit four fours and two sixes in an unbeaten 47 off 40 balls.

Earlier, for Kolkata, Krishna took three wickets for 30 runs, Pat Cummins took two wickets for 31 runs and Sunil Narine took two wickets for 22 runs and stopped Punjab for 123 runs. Kolkata won the toss and decided to field first. Punjab captain Lokesh Rahul scored 19 runs and was dismissed on the team score of 36. After this, Chris Gayle Zero and Deepak Hooda returned to the pavilion by scoring one run. Opener Mayank Agarwal scored 31 runs with the help of one four and two sixes in 34 balls and was dismissed at the team’s score of 60 runs.

Moises Henriques was bowled by Sunil Narine for two runs. Nicholas Pooran scored 19 runs off 19 balls with the help of a four and a six. Shahrukh Khan was out for 13 runs off 14 balls. Chris Jordan hit two sixes off Krishna’s first three balls in the last over of the inning but was then bowled on the fourth ball. Jordan hit four and three sixes in 30 runs off 18 balls. In this way, Punjab’s innings stopped at 123 runs.