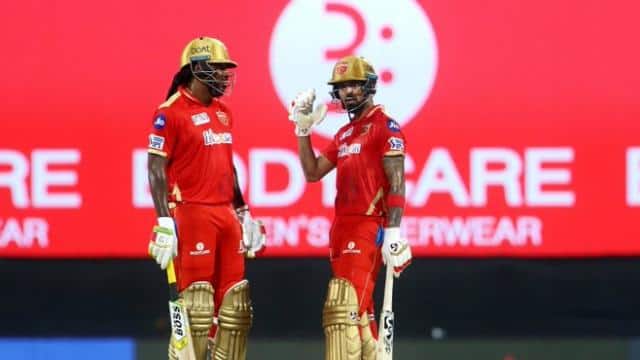 With the unbroken 79-run partnership for the second wicket between captain Lokesh Rahul (60 not out) and veteran Chris Gayle (43 not out), the Punjab Kings beat the five-time champions Mumbai Indians by nine wickets in the Indian Premier League on Friday, recorded their second win of the season.

Man Of The Match Lokesh Rahul

Even after captain Rohit Sharma’s 63-run inning, Mumbai Indians were able to score 131 for six wickets while batting first. Punjab won by scoring 132 runs for one wicket in 17.4 overs. Man of the match Lokesh Rahul hit three sixes and as many fours in a brilliant 52-ball inning while Gayle hit five fours and two sixes in a 35-ball inning. Mayank Agarwal also contributed 25 runs for Punjab and shared a 53-run partnership for the first wicket with Lokesh Rahul.

In Mumbai, 79-Run Partnership inning For the Third Wicket

Earlier, Rohit played five fours and two sixes in his 52-ball inning after playing initially. He shared a 79-run partnership for the third wicket with Suryakumar Yadav. Suryakumar scored 33 runs in 27 balls. Mohammed Shami for Punjab Kings and Ravi Bishnoi, playing their first match of the season, took two wickets for 21 runs in their own four overs in the same manner. Deepak Hooda and Arshdeep Singh took one wicket each.

The Punjab Kings started the small-goal chase aggressively. Rahul hit two fours while Mayank Agarwal hit a six against Krunal Pandya who came in to bowl the second over. Rahul then sent Bumrah’s ball across the boundary line. In the fourth over, Mayank Agarwal hit two consecutive fours against Bolt. The team scored 45 runs without any loss in the powerplay.

Mayank completed the half-century of the team with a four off the ball of Krunal in the seventh over. Rahul Chahar, however, brought the first success to the team by sending Mayank Agarwal to the pavilion, caught by Suryakumar Yadav in the next over. Mayank hit four fours and a six in his 20-ball inning. After this, Rahul Chahar and Jayant Yadav stopped the Punjab Kings batsmen from scoring runs easily. Gayle, however, eased the pressure by hitting one against Rahul Chahar in the 12th over and then two fours against Jayant in the 13th over. Lokesh Rahul then hit a six against Kieron Pollard who came for bowling, while Gayle sent Jayant’s ball to the stadium.

After this, Rahul completed his half-century in 50 balls with a single off the ball of 17th over Bumrah. Gayle then struck a six off a bolt ball and turned the match towards Punjab and the rest of the game was completed by Rahul with a six and then a four in the same over.

Earlier, on a difficult pitch for batting, Punjab captain Rahul decided to bowl after winning the toss and his bowlers prove the decision right. The Mumbai batsmen struggled to score runs in the early overs. South African wicket-keeper batsman Quinton de Kock failed once again and scored three runs to catch Moises Henriques off Deepak Hooda in the second over.

The first four of Mumbai’s innings came on the final ball of the fifth over when Rohit drove Henriques’ ball over the boundary. It was Mumbai’s only four in the powerplay and the team could only manage 21 runs for one wicket in the first six overs. This is their second-lowest score in the Powerplay. Mumbai’s lowest score in the powerplay is three for 17 against Punjab’s team in 2015.

Playing the first match of the season, Ravi Bishnoi got Ishaan Kishan caught by wicketkeeper Rahul on the last ball of the seventh over. He could score only six runs in a 17-ball inning. Rohit accelerated the run pace with two consecutive fours against Fabian Allen in the eighth over. He hit the first six of the inning in the next over of this bowler, after which the team’s score reached 49 for two after 10 overs.

Suryakumar Yadav then hit his first four in the 11th over against Arshdeep while hitting a six in the 13th over. He took a single over and completed a 50-run partnership for the third wicket with Rohit. Rohit also completed his half-century in 40 balls by hitting the second ball of the 14th over. On the first ball of the 17th over, Bishnoi ended Suryakumar’s 33-run inning at the hands of Chris Gayle.

After this, Rohit was caught by Allen on the boundary in an attempt to put a big shot on the ball of Mohammed Shami. Kieron Pollard welcomed Arshadeep, who came in for the bowling in the 19th over, with a six, but poor in-form Hardik Pandya failed to read his slow ball and was caught at the boundary. Shami took the wicket of Krunal Pandya (03) after spending just six runs in the 20th over. Mumbai’s team was able to score just 34 runs after losing four wickets in the last five overs.