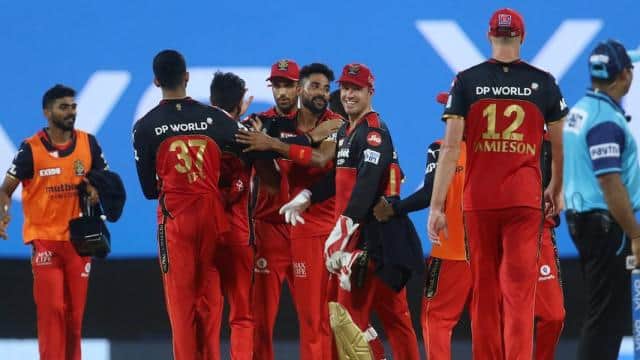 Royal Challengers Bangalore defeated Kolkata Knight Riders by 38 runs in the 10th match of the Indian Premier League (IPL). RCB has registered their third consecutive win in IPL 14. RCB gave KKR the target of 205 runs to win. KKR could only manage 166 runs at the loss of 8 wickets in 20 overs. Kyle Jamieson took three wickets for RCB. Apart from him, Yajuvendra Chahal and Harshal Patel took two wickets. Andre Russell scored the highest 31 runs for KKR.

Royal Challenger Bangalore (RCB) recovered from a poor start on the back of the aggressive innings of Glenn Maxwell and AB de Villiers, batting first against Kolkata Knight Riders (KKR) in the Indian Premier League (IPL) T20 match on Sunday, RCB raised a challenging score of 204 runs for four wickets. Maxwell scored 78 off 49 balls with nine fours and three sixes on Chepak’s difficult pitch, while De Villiers scored an unbeaten 76 from 34 balls with the help of nine fours and three sixes.

After losing the wickets of captain Virat Kohli (05) and Rajat Patidar (01) early, Maxwell shared a brilliant partnership of 86 runs for the third wicket with Devdutt Padikkal (25) and 53 runs for the fourth wicket with AB de Villiers. After Maxwell’s dismissal, De Villiers’ aggressive innings led RCB to score 56 runs in the last three overs with Kyle Jamieson contributing 11 off not out four balls.

Kohli decided to bat first by winning the toss, but KKR captain Eoin Morgan once again proved his decision to be wrong initially by putting spinners from both ends on the bowling attack. Varun Chakraborty sent Kohli to the pavilion in the second over. Rahul Tripathi ended his innings by taking a brilliant catch. Varun bowled Patidar (01) who joined the team in place of Dan Christian and gave KKR another success in the same over.

Maxwell, who came to the crease after the initial setback, fired aggressive shots from the start. He welcomed Shakib Al Hasan in the fourth over with four. In the bowler’s next over, he hit a six and a four. Opener Devdutt Padikkal also hit a four in this over, taking the Bangalore team’s score to 45 for two in the powerplay. Chakraborty, who came back to bowl in the eighth over, took the advantage of no-ball off the very first ball, with Maxwell taking a six on a free hit. The Australian batsman hit a four against compatriot Cummins in the ninth over and then completed his half-century in 28 balls with a run.

The Prasidh Krishna broke his 86-run partnership with Maxwell for the third wicket by getting Padikkal caught by Rahul Tripathi in the 12th over. Padikkal hit a 25-run knock off 28 balls with the help of two fours. After this, AB de Villiers, who came to the crease, after chasing a few balls in the beginning, made two consecutive fours off Chakraborty’s ball and Maxwell hit a six on the switch shot, making 17 runs in 15 overs. Cummins ended Maxwell’s innings by getting caught by Harbhajan Singh on the last ball of his fourth over. De Villiers, however, had no impact on this and he hit a six and a couple of fours against Russell, scoring 17 runs from the over.

Jamieson took an aggressive stand against Harbhajan Singh and hit fours and sixes off consecutive balls. De Villiers hit a six off the fifth ball of the over to complete his half-century in 27 balls. De Villiers hit three fours and a six against Russell, who came for bowling in the 20th over, and scored 21 runs in this over. Russell, who took five wickets in the previous match, plundered 38 runs in two overs in this match. For KKR, Chakraborty took two wickets while Cummins and Krishna took one wicket each.