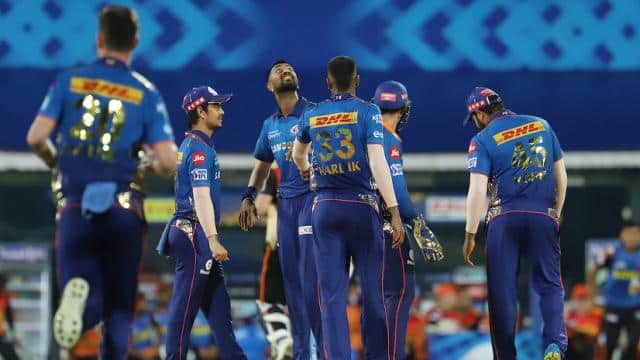 In the 9th match of Indian Premier League (IPL) 2021, Sunrisers Hyderabad was defeated by Mumbai Indians by 13 runs. Chasing a target of 151 runs, Sunrisers Hyderabad was bowled out for 137 runs in 19.4 overs. For Mumbai, Rahul Chahar and Trent Boult took three wickets. Bairstow scored the highest for Hyderabad by 43 runs. Apart from him, Jaspreet Bumrah and Krunal Pandya took one wicket each. This is the second consecutive win for Mumbai Indians and with this; Mumbai has reached the top of the points table.

Earlier, after Rohit Sharma’s best start, Mumbai Indians scored a challenging score of 150 for five, batting first against Sunrisers Hyderabad in the Indian Premier League match on Saturday, thanks to an aggressive inning by Kieron Pollard in the last over. Rohit gave the team an aggressive start by sharing a 55-run stand for the first wicket with Quinton de Kock, but after his dismissal, Mumbai batsmen failed to play openly, pollard hit two six off the last two balls of Bhuvneshwar Kumar’s innings to take the team’s score to 150 runs. He scored an unbeaten 35 in 22 balls with the help of three sixes and a four.

After Mumbai’s decision to bat after winning the toss, Rohit and Quinton de Kock gave Mumbai a quick start. Quinton de Kock made his intentions by hitting a boundary off Bhuvneshwar Kumar’s first ball. Rohit hit fours and sixes in consecutive balls of Mujeeb Ur Rahman in the third over. He also hit a great six off Bhuvneshwar in the next over. Mumbai got off to a great start by scoring 53 runs without any loss in the powerplay.

Vijay Shankar, who came for bowling in the seventh over, gave the first success to the Hyderabad Sunrisers with Rohit’s wicket. Rohit hit two fours and two sixes in a 25-ball 32-run inning. In the next over of Shankar, Suryakumar Yadav hit a six but on the next ball, he caught & bowled. After this, the Sunrisers’ bowlers did not allow De Kock and Ishan Kishan to play openly. Meanwhile, in Shankar’s third over, Rashid Khan caught a hard catch of De Kock on deep backward squares.

Mumbai’s team could score only one four in the 9th to 16th over but Pollard hit a 105-meter-long six off Mujib’s first ball in the 17th over. It was the longest six of the current season. In the same over, however, Ishan Kishan was caught by wicketkeeper Johnny Bairstow. He could score only 12 runs in a 21-ball inning. Vijay Shankar dripped Pollard’s easy catch off Khalil in 19 overs but Hardik (07) caught Virat off the next ball and returned to the pavilion. Pollard hit the last two balls to take the team’s score to 150 runs.