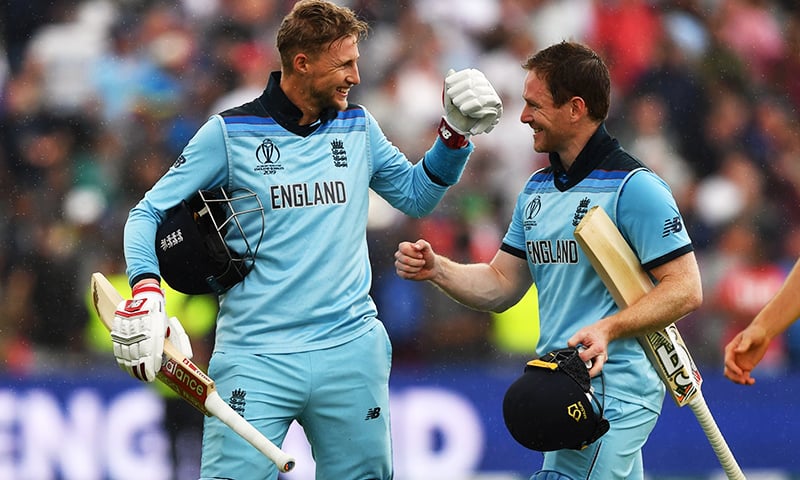 Host England has reached the final of the ICC World Cup 2019. England defeated Australia by 8 wickets in the second semi-final on Thursday. England bowled superbly and then batted superbly in the match played at Edgbaston in Birmingham.

After winning the toss and batting first, Australia made a challenging 223 runs. In reply, England easily grabbed this goal by losing two wickets in 32.1 overs. England will now clash against New Zealand on 14 July. The England team reached the final for the fourth time.

For the first time, the Australian team has lost the semi-final. England reached the finals in 1979, 1987 and 1992 but did not win the World Cup. However, this time the hosts were considered to be the strong contenders of the title from the beginning. Now that England and New Zealand are in the final, one-day cricket is set to get a new champion. Actually, the two teams have never been able to clinch the world title.

England started a fantastic start chasing the target. Jason Roy (85) and Johnny Bairstow (34), who came in to start the innings, shared a 124-run partnership for the first wicket. Both of them fired the Australian bowlers from the start. Roy scored fast runs in comparison to Bairstow.

This partnership was broken by Pat Cummins’ second ball of the 18th over by dismissed the Bairstow with LBW. He hit 5 fours in his 43-ball innings. Subsequently, Roy led the inning with Joe Root (49 not out). Both of them added 23 runs for the second wicket.

Roy was going close to the century but was dismissed behind the wicket on the fourth ball of 20th over. However, the decision to give out Roy by the umpire has been quite controversial. Because at a replay, the ball did not go into the hands of wicketkeeper Alex Carey.

Roy scored nine fours and five sixes in his 65-ball knock. Joe Root and captain Eoin Morgan (45 not out) took the front and returned to winning the team. Both of them shared an unbroken partnership of 79 runs for the third wicket.

Earlier, the Australian team made 223 runs in the allotted 49 overs. Steven Smith made the most runs from the Kangaroo team. He played 85 balls with 6 fours in 119 balls. Smith was heading towards his ninth ODI century but ran out in the 48th over.

On the brilliant innings of Rohit Sharma (103) and Lokesh Rahul (111), India defeated Sri Lanka by 7 wickets in their final league match of the ICC World Cup 2019. The Indian team has reached the top of the table with this win. India has 15 points in 9 matches.

In this match played at Leeds’ Headingley Stadium, India first show the superb bowling and then batted superbly. Earlier, Sri Lanka presented a challenge of 265 runs. In reply, India achieved this target easily in 43.3 overs at the loss of three wickets.

The beginning of India is a wonderful one. Rohit and Rahul, who started the innings, made a partnership of 189 runs for the first wicket. India lost the first wicket as Rohit in the 31st over. Kasun Rajitha showed them the way to pavilion. He hit 14 fours and two sixes in his inning of 94 balls.

Rohit Has Become The Second Player To Score 600 Runs

This is Rohit’s fifth century in this World Cup. With this, he has become the highest scorer in a World Cup. During this period, 600 runs were completed in the World Cup. He is the second Indian batsman to complete 600 runs in World Cup and fourth in the world.

Before this, the achievement was made by former India great Sachin Tendulkar in his 2003 World Cup. After Rohit’s dismissal, Rahul led the innings with captain Virat Kohli (34 not out). Both shared a 55-run partnership for the second wicket and brought the team closer to victory.

However, due to Rahul’s dismissal in the 41st over, the partnership broke down. He became the victims of Lasith Malinga. Rahul hit 11 fours and a six in his 118-ball knock. After that, young batsman Rishabh Pant (4), who came to the crease, lost his wicket cheaply.

Kohli and Hardik Pandya (7 not out) won the match and returned to the pavilion. Kohli hit three boundaries in 41 balls. Pandya played 4 balls and hit a boundary.

Earlier, batting first by winning the toss, Sri Lanka scored 264 runs by losing 7 wickets in the allotted 50 overs. Angelo Mathews (113) scored highest runs from Sri Lanka. He hit 10 fours and two sixes in his 128-ball inning. The beginning of the Sri Lankan team is very bad.

Dimuth Karunaratne (10) returned to the pavilion in the fourth over. Bumrah then took the second opener Kusal Perera (18) wicket in eighth over.

Sri Lanka lost the third wicket as Kusal Mendis (3). Sri Lanka had great hopes from Avishka Fernando (20) but he lost his wicket in the 12th over. He gave a catch to Dhoni at Hardik Pandya’s delivery.

The tragedy of Sri Lanka can be judged by the fact that its four wickets fell to a total of just 55 runs.

Angelo Mathews and Lahiru Thirimanne (53) picked up the morale and saved the team from faltering. Both of them shared a vital partnership of 124 runs for the fifth wicket. This partnership was broken by Kuldeep Yadav in the 38th over by Thirimanne out. Then Mathews led the Sri Lankan inning with Dhananjaya de Silva (not out 29). Both shared a 74-run partnership for the sixth wicket. Mathews became a victim of Bumrah in the 49th over.

After this Sri Lanka’s seventh and last wicket fell in the 50th over as Thisara Perera (2). For India, Jaspreet Bumrah took three, Hardik Pandya, Ravindra Jadeja, Kuldeep Yadav, and Bhuvneshwar Kumar got one wicket each.